Modvigil 200 by HAB Pharma is safe to use as a beginner to nootropic tablets and can be purchased for less than your typical Modafinil tablets. Designed to be the lowest-cost generic Modafinil tablet, this drug is a favorite for a safe and stable boost to your efficiency. Use it responsibly to bring an added drive to your day! It is the most cost-efficient way to enhance your day. With Modafinil, you can give yourself boosted focus with the calmed nerves that coffee cannot provide!

Modvigil 200 by HAB Pharma is a new low-cost cognitive enhancement tablet used to treat daytime drowsiness. Modvigil contains 200 mg of Modafinil, which is the generic version of Provigil by Cephalon and the most popular generic form of this pill for new users. Modafinil was originally prescribed for daytime drowsiness, but many now use it to enhance brainpower throughout the day. Modvigil is a nootropic drug that boosts productivity in your daily work, whether you’re getting through the grind of nine to five, living an active creative life, or getting through your advanced education.

HAB Pharmaceuticals is a respected manufacturer of generic pharmaceuticals in India. Modvigil is one of its flagship products. But is Modvigil the same as Modafinil? What is it, why is it such a popular product, and just how safe is it? We explore nootropic drugs and look at the options open to those who want to try this “Viagra for the brain.”

Modvigil: What Is It?

Modvigil is Modafinil. It is simply one of the many brand names under which Modafinil tablets are manufactured and marketed. Modvigil is the same as any other medication containing Modafinil with one exception: it costs a great deal less.

Who would be interested in using Modvigil in the first place? It turns out that a great many people would like to get their hands on Modvigil, and they mightn’t suffer from the disorders the drug was meant to be used for. Here’s why.
Modvigil was registered to relieve the symptoms experienced by people suffering from a range of sleep disorders. These could be people suffering from narcolepsy, or it could be those who struggle to get adequate sleep owing to sleep apnea or shift work disorder.

But additional research into its potential uses turned up some interesting facts. Modvigil keeps people awake. No surprises there, after all, it’s what it’s meant to do. Secondly, it places the brain in a state of crystal-clear alertness and holds it there for hours beyond a regular person’s capacity for concentration.

Is Modvigil the Same as Modafinil?

To understand how Modvigil can be the same as Modafinil, we need only look at everyday medicines. Let’s take regular Aspirin as an example. If you walk into a pharmacy asking for Aspirin, you could be given a package with a name such as Ascriptin, Aspir-81, Durlaza, Ecotrin, Ecprin or Fasprin to name but a few. Each pharmaceutical company allocates its own brand name to Aspirin in the hope of generating brand loyalty that will make consumers say: “I only want (brand name).”

The truth is that all these brands have the same active ingredient. Maybe you liked the packaging, or the name just appeals to you, but your favorite brand of Aspirin is pharmacologically identical to all the others. It may not look like them, but it’s the ingredients that count.

Modafinil is our active ingredient name in this case, and it has been marketed as Alertec, Provigil, and Modvigil. If we were to ask people to compare these drugs, many of them would get back to us saying that one is better than the rest, but in truth, they are identical in all the ways that matter.

How to Use It?

How to use Modvigil? Modafinil is a class IV drug. That means that the FDA doesn’t believe it has a high capacity for addiction or abuse. However, it is not meant to be used every day for sustained periods. And although there is no scientific evidence of tolerance developing, some Modafinil users say that taking regular breaks helps to sharpen its effects.

Thus, use Modvigil for controlled periods of time, and do not take it on days when there’s no real need to outperform.

In addition, higher doses are not necessarily better, and since this has been proven in clinical trials, it makes no sense to risk an overdose by taking Modafinil in any way other than directed.

Finally, Modvigil will keep you awake. If you use it stay awake for sustained periods as a study drug, don’t overdo it. The human body and mind need sleep to perform at their best. Ideally, you should not miss sleep, and if you do so, you should be aware of the need to get rest, even if you are not feeling overtired.

Learn More How to Use Modvigil

How to Take Modvigil Pills Safely?

Although Modvigil has a low incidence of side-effects and is deemed to be a very safe drug, some people do suffer side effects. When seeking to minimize risk consider the following:

It’s not difficult to see how to take Modafinil. The package insert provides all the details. Read it carefully.

Dosage for Modvigil 200 by HAB Pharma may depend on a number of factors. Metabolism, desired productivity levels, and previous experience with similar drugs should all be taken into consideration before deciding on a dosage. Modvigil is produced in 200 mg tablets, but many users have found that 100 mg is enough to get them through their day with a gentle drive and focused productivity. Splitting these pills in half will stretch your dollar and make sure that your work does not suffer!

The Modvigil dosage is set at 200mg taken with or without food. In trials, this dose was found to be effective and was therefore recommended. Scientists administered doses as high as 400mg to test subjects, but although this dose of the medication was well-tolerated, it did not seem to have any additional benefits. There is, therefore, no reason to take a dose higher than 200mg.

However, there is a reason to take a lower dosage. As previously mentioned, first-time users should test the waters with a half dose before progressing to the regular dose on the following day. If side effects are evident when using a half dose, they will be much more intense at a full one.

During USA preregistration studies, about 8 percent of subjects, as compared to 3 percent using a placebo, discontinued Modvigil owing to side effects. In the vast majority of cases, these side effects were uncomfortable rather than dangerous. The most common side effects of Modvigil are:

Modvigil caused a rash in 0.8 percent of participants, and since these reactions can be extremely severe, immediate discontinuation followed by careful monitoring are recommended.

The most frequently observed rare side effects are listed below (note, this is not a full list). The incidence of the same side effects in people using an inert placebo are included for completeness and so that its dangers can be viewed in perspective.

Learn More About Modvigil Side Effects

Modvigil interacts with hormonal family planning pills, decreasing their effect. This interaction lasts for several weeks even after discontinuation. Do not use Modvigil with alcohol.

You should not use Modvigil without a doctor’s prescription if you have preexisting health conditions including:

With space station astronauts “officially” using Modvigil to boost mental alertness, and everyone from students to top executives using it for the same reason, there is no shortage of reviews. Each person is different, so pinpointing a typical review would be difficult. However, we feel that the following two reflect the average person’s experience with this drug.

I’ve used a range of brands of Modafinil. Modvigil isn’t any better than the rest of them, but it has the same effect for a fraction of the price. Very happy with HAB Pharma. Mark

If using Modvigil is a cheat, then I cheated when studying for my finals. But I boosted my average, and passed with flying colors. Jenny

Where to Buy Modvigil Without Prescription in USA?

In the US, you need a prescription to get Modvigil from a regular pharmacy, but it’s an open secret among those who know where to buy Modvigil that online purchases are much cheaper and easier. Provided you know who makes it and use your Modvigil as recommended, its “recreational” usage is about as dangerous as using caffeine – and possibly less addictive. We also need to remember that although Modvigil is a prescription medicine, it is a legal substance, and not nearly as tightly controlled as Schedule II or III drugs.

Modafinil tablets purchased in a United States pharmacy can cost between $10 - $20 per tablet, but when purchased through an online pharmacy like our Modafinil Online Pharmacy, they cost only $1 - $2 per tablet. You can buy Modvigil 200 by HAB Pharma online with Bitcoin, or credit card, and the pills will be delivered to your door quickly. Buying online will bring you amazing prices, speedy delivery, and a number of discreet payment options!

Customers of Modafinil Online Pharmacy are “totally satisfied” with their purchases. They are thrilled that their purchases arrive in a timely fashion and that customer service is such a priority. No US pharmacy could have saved them so much money with such friendliness!

Some customers in the United States may have difficulties using their debit or credit card due to the high number of declines that United States banks inflict on international pharmacies. It is easy to buy Modvigil online with Bitcoin though. Bitcoin is digital currency, it is independent of any central bank or authority, making it easier to make online purchases. Buy Modafinil online quickly, easily and safely.

Choose our online pharmacy to get Modvigil from HAB Pharmaceuticals. Payment is easy, and delivery is rapid. 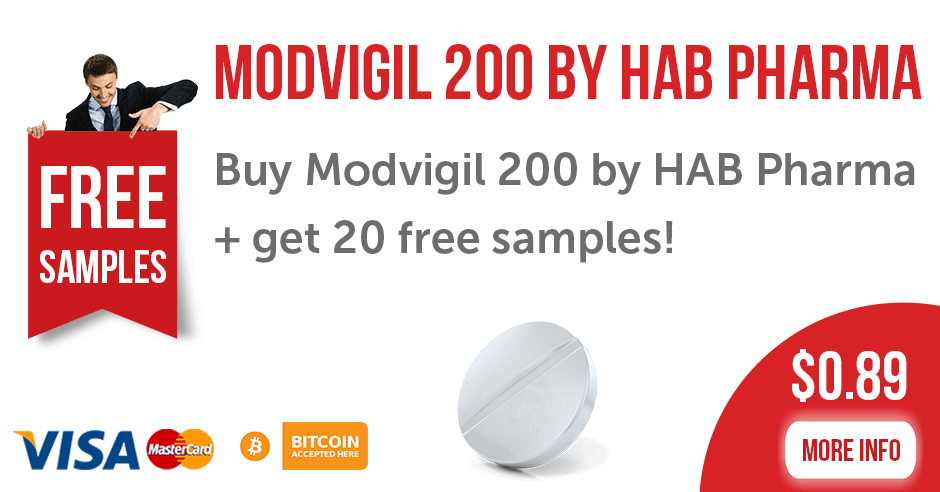