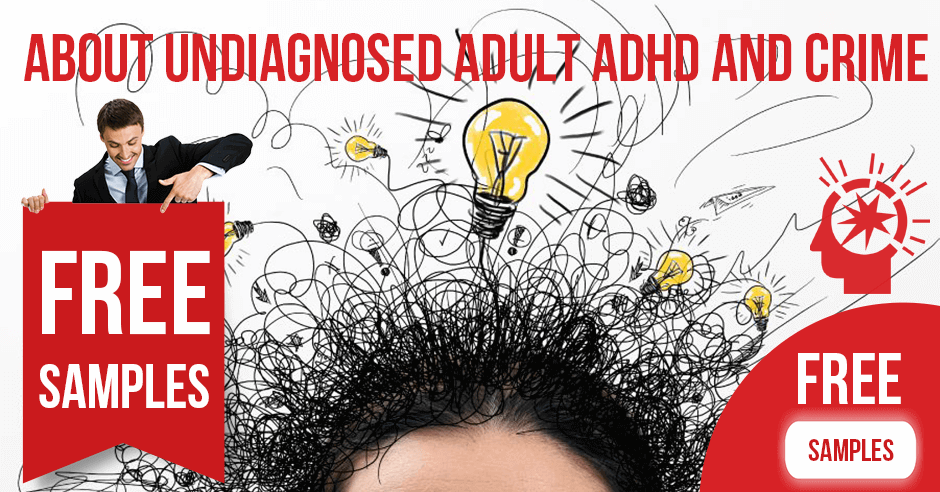 About Undiagnosed Adult ADHD and Crime

What is the communication between ADHD disease and crime? Interesting researches and facts – how troubles with aggressive and impulsive behavior can lead to criminality and prison.

ADHD Disease and Crime: Background, Causes and Researches. How Problems with Aggressive and Criminal Behavior Can Lead You to Prison.
Content:

Attention-deficit/hyperactivity disorder, better known as ADHD is a condition that currently affects millions of people across the globe. For many years, it went on undetected as it beset people from operating normally throughout their daily lives. When most people think of ADHD, they think of children who cannot sit still in the classroom, or adults who cannot focus on projects while going through their work day. The general perception of this condition is more of a manageable annoyance than a serious problem. The other side to ADHD consists of: behavior problems, impulsiveness, criminal behavior, defense (defensiveness), criminality, defiant behavior, aggressive actions in adults, impulsive responses, social problems, anger outbursts and adverse emotional effects.

Background of ADHD and Crime

ADHD behavior problems often begin in childhood, typically between the ages of 3-5. Diagnoses between the ages of 0-2 would not be relevant as this is too young to detect any inabilities to focus or other adverse behaviors that are associated with cognitive decision making. The earliest evidence of ADHD came in 1902 when British pediatrician Sir George Still described ADHD as “an abnormal defect of moral control in children.”

This definition is particularly revealing, while at the same time troubling because when pondering it, the realization of how connected ADHD and crime are, is unmistakably apparent.

The Three Main Components of ADHD are Defined as: 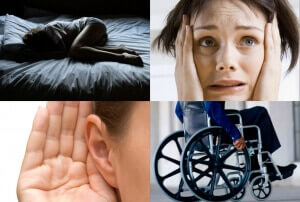 Some disorders that typically occur in combination with ADHD:

Morals are what guide our choices of what is right and what is wrong. Without a moral compass to center us, there is the opportunity for great harm to occur either to ourselves, or to others. Consider this, a child should not steal. Adults should not steal either. What is it that makes stealing wrong? The moral compass residing within us that causes us to feel bad about stealing and even before that, the idea or thought of stealing. If you stole as a child, the penalty was shame (if your parents found out) when they made you go to the person you stole from and apologize to them. If you continue stealing, it does not stay at low value items, there is a progression. It starts with a pencil, a book, compact discs, movies and then those who were never corrected “graduate” to ponzi schemes, bank heists and other forms of large scale embezzlement. This might sound extreme, but the effects of ADHD over long periods of time become extreme. As more was and is learned about ADHD, the direct, causal relationship between it and crime cannot be ignored.

Consider the nature of crimes we see occurring when they are reported on the daily or nightly news. Terrorist attacks, bank robberies, officer involved shooting, kidnappings, murders and other sorts of depravity that leave us stunned that it really happened. The common question we ask ourselves is, “What were they thinking about?” This is a fair question because a reasonable, rational person wouldn’t engage in behavior that is in direct opposition to their own well-being. If someone such as a researcher or doctor asked how many of them have ADHD and somehow the people involved (were still alive or if they are deceased, the doctor could obtain their medical records) consented to testing, there would be a good number of them that have or have not been diagnosed with ADHD.

People With ADHD Who Are in Prison or Arrested: Statistics and Facts 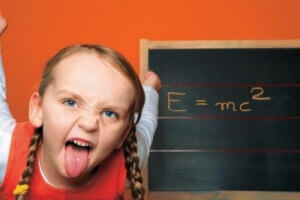 As stated earlier, criminality precipitated by ADHD is an escalating or progressing problem. It starts with something as small as minor theft, then it is further evidenced by withdrawing from people due to ridicule. Those who suffer with ADHD then turn inward for relief, and they find themselves growing increasingly upset and depressed with their situation as they are unable to correct it. Now, let us take this a step further. The anger and depression someone suffering from ADHD feels is valid, because they (in this example) do not know they are suffering with this condition. So, they are right to be angry and depressed, but the focus of their anger and depression is wrong.

As a person continues to follow this heartbreaking path, the worse they become and criminality spikes later on in their lives. 5% of our population suffers from ADHD. This number might be a conservative estimate at this point, but think about this – 1 out of every 20 people are dealing with this issue. The following statements are not generalizations, but statistical facts backed by crime statistics and prison inmate data. Those with ADHD are twice as likely to commit crime. Why? Because their moral control is either off or limited because of the detrimental effects of the condition. People with ADHD commit three times as many offenses as those without the disorder. Why? Because with their thoughts centered on people and those that they perceived as hurtful, it builds resentment and the desire to “get back” at people in some way. It might not even be directly at the person who offended them, but people in general as they seek to correct many because they tend to believe all people act the same way. People with ADHD are more susceptible to problematic drug use and they are more likely to attempt to take their own life. Why? Depressive thoughts pervade their minds and when they become too great, an escape in the form of drugs or in the worst case, suicide appear to be their only options.

15 peer reviewed studies revealed shocking information about ADHD and its prevalence in those imprisoned:

Researches on ADHD and Criminal Behavior

Researchers began to study the correlation between inmates and ADHD, and the results they discovered were very revealing. A statistically significant number of those who are incarcerated were either suffering from ADHD, or they exhibited characteristics in their youth that went undiagnosed. Without this being identified and corrected, it blossomed as the person grew and gained more and more control. Without knowledge of what was going on in their minds, their rash decision making, quick path to rage and inability to truly connect with people served as a major detriment as it landed them behind bars. Continuing explanation of the causal relationship between ADHD and criminal behavior is further proven with the following data from different research studies:

Defiant and Aggressive Behavior Can Be Prevented 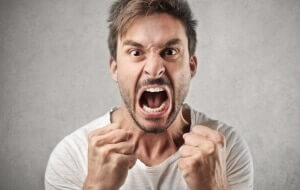 A major side effect of ADHD is defiance and aggressive behavior. Typically, in life we respond in like manner when receiving hostile or aggressive interaction. This is not always the best course of action when dealing with a loved one that is a child or adult that is suffering from ADHD. Understandably, we cannot know all who suffer from ADHD, but for those that we know about, here are some strategies to help manage the situations that arise. When a person has an angry outburst, the worst thing to do is respond in anger. This further entrenches them in their emotions and pretty much assures an amicable outcome will not be reached.

Rather than responding in kind, look beyond their anger and what they have said that may be directed at you. Always see them through the lens of what they are dealing with while demonstrating understanding and compassion. What could be a major altercation is often precipitated a perceived slight that was not intended in the first place. You could have said something that reminded them of an experience or they may have had a thought that placed them in a bad spot mentally and lacking the ability to articulate what they are dealing with; they lash out as a way of release.

Another great way of preventing these behaviors starts with a plan. Armed with the knowledge that these outbursts can happen; you should create a strategy of navigating through them until calm behavior returns. Learn what would calm them down, recognize what they are dealing with and give them a set timeline to return to normal. This type of interaction demonstrates being firm while being gentle at the same time. You should also educate them about the disorder at length. The more someone who has ADHD knows about it, the better prepared they will be when its side effects arise.

Creating an emotional management scale is also a great idea to help those with ADHD determine what they can handle and what is too much to deal with at the time. Becoming overwhelmed with the circumstances typically leads to a downward spiral of bad decision making. When a person is unable to manage their thoughts and emotions, it is very easy to slip into detrimental behavior rapidly. Something as small as someone cutting you off in traffic can snowball into a full-blown episode if the emotions generated by the inconsiderate actions of another are not checked immediately.

Consider the example table below that would help navigate dealing with the potential triggers of ADHD.

Things to Think About to Calm Down – Serious Level (1-5):

Timely ADHD Treatment Can Give You Second Chance 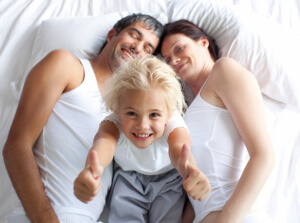 It has been said time and again that the best defense is a good offense. That notion is most applicable to those who suffer with ADHD. It is better to find out early and be on the path to recovery, rather than to find out you are suffering from ADHD after you’ve done something that has gotten you into trouble. It is incumbent upon parents to monitor the crucial time between three to five years old, where the behaviors would likely manifest.

By addressing the symptoms early and putting a focused strategy into place, you are putting your children and loved ones in the best position to live a healthy, productive adult life. Imagine the upside to treating people earlier in life as opposed to allowing their “treatment” to come in the form of imprisonment. In the last decade, many mental hospitals and asylums were closed and those getting the treatment they needed were moved into general prisons, where the care provided is a woeful disservice.

Always make sure you are monitoring yourself, your children and loved ones for any signs of ADHD. You do not want to be on the wrong side of getting them the help they or yourself need it.

Wishing you a health filled life!